Our firefighters headed to Serbia this festive season to offer a helping hand to local children. 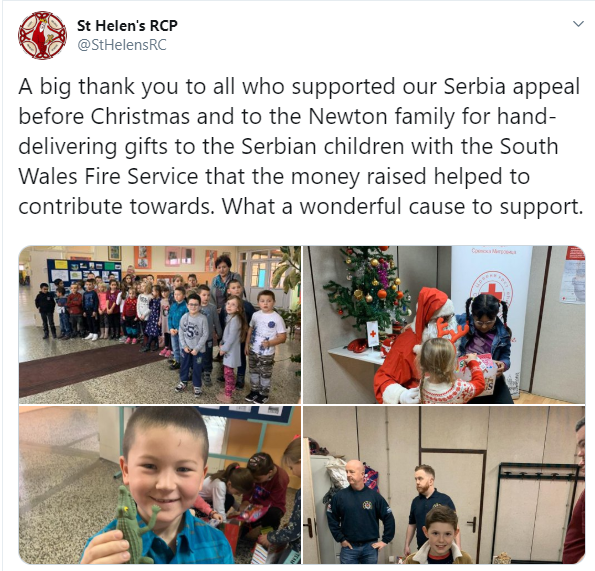 Blazing to Serbia (B2S) is a charity that was initially established by members from South Wales Fire and Rescue Service in 2006. Over time the charity has provided equipment that is no longer required by the Service and given it a new lifesaving purpose to communities in Serbia.

Through their work alongside the Serbian Fire Services, the B2S team met with the Red Cross in Sremska Mitrovica. The Red Cross support the local community and work with B2S to help provide Christmas gifts for school children in nearby villages, which is now an annual tradition. Last year the team (who were made up of serving and retired firefighters, ex fire cadets and family members) collected donations and held a fundraising day at St Helen’s RC Primary in Caerphilly who hosted an own clothes day that raised over £300, alongside online donations which came to over £190. This resulted in the team purchasing enough gifts to fill nine suitcases with small toys, sweets, new toothbrushes and cosmetics.

Once the team arrived in Serbia they spent their first day preparing over a 100 gift bags ensuring each child received a gift suited to their needs. On the third day the team visited a small school to deliver the first of the gifts. Later that day everyone returned to Sremska Mitrovica Red Cross Centre so Father Christmas could visit the children to deliver the last of the gifts. All the hard work in preparation had been worth it to see the smiles on the children’s faces.

A B2S trip wouldn’t be complete without a visit to a Fire Station and this year they visited Sremska Mitrovica where the story all began. It’s great to see how the Station had changed over the years, meet crews and to see our ex-SWFRS truck still in use! The team also saw the City Station that covers Novi Sad before enjoying some hard earned downtime in the local Christmas Market.

More information on Blazing to Serbia can be found here: http://blazingtoserbia.co.uk/