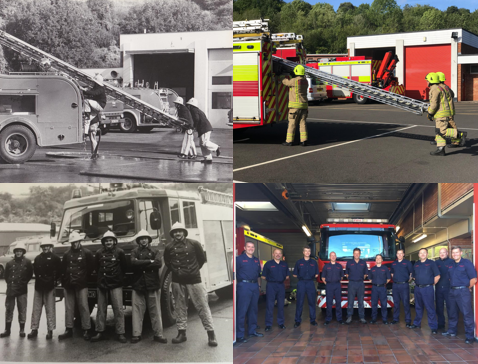 The city of Newport was originally protected by Newport County Fire Brigade based in Dock Street in the town centre.  The Station was then closed in 1969 for demolition and Malpas Fire Station on Malpas Road was opened, along with neighbouring Stations in Maindee and Duffryn.

The Station was officially opened by Her Worship The Mayor of Newport Councillor Mrs L.M. Bowen J.P. on 2nd December 1969 still under the Newport County Fire Brigade.

Now, Malpas Fire Station is one of over 50 Stations under South Wales Fire and Rescue Service and has a vast range of firefighting and rescue capabilities. This includes rescue boats, rope rescue teams, swift water teams for rivers and flooding and specialist extrication teams for road traffic collisions.  Malpas also boasts a successful branch of Fire Cadets and is home to the Newport Branch of SARA – Severn Area Rescue Association.

Over the years, Malpas crews have supported on international events including the NATO Summit with President Obama in 2014, featured on Rod Gilbert’s hit BBC show Work Experience and has just opened a brand new multi-agency engagement hub for the local community.

Join us to celebrate the 50th Anniversary, where Malpas crews will be hosting a free entry Station open day on Saturday September 7th from 10am till 4pm with support from emergency services partners including Gwent Police and the Welsh Ambulance Service. The jam-packed day will see a police dog display, road traffic collision and rescue demonstrations, a live band and much more!